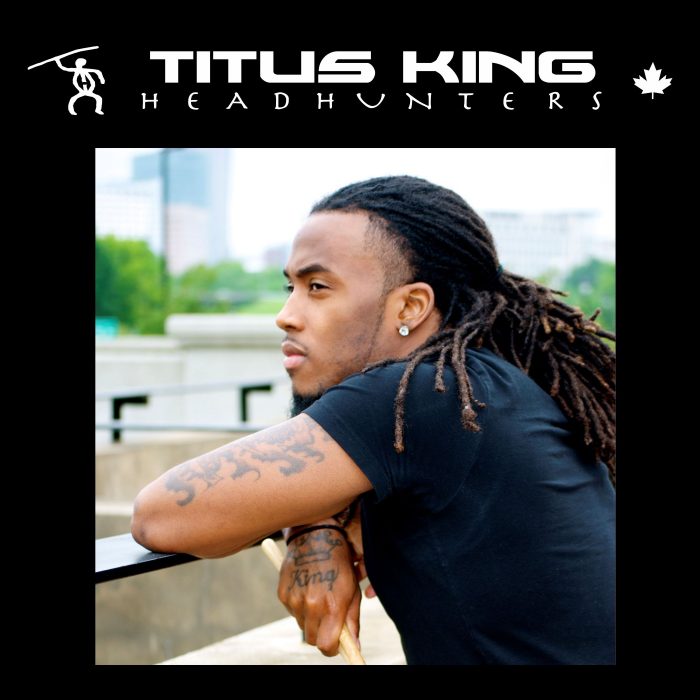 Titus King better known as “King” was born in Macon, GA in 1990. King was introduced to music at a very young age by his father Charles King Sr., a talented piano and sax player and his mother Starretta King, a gifted singer. It was also his father who began teaching King along with his older brother, Charles King Jr., the fundamentals of drumming. At the age of 5, Kings desire to create music had become so strong that he crafted his own drum set out of pillows, plates, and cereal boxes. Since that time, King has spent countless hours practicing to perfect the gift his innate talent of drumming. He started out playing for his home church in Macon GA, at the age of 8 and immediately people around the city started to hear about this young kid who was shocking the ‘seasoned’ musicians with his drumming skills. King started traveling with local groups, and started playing for concerts around Georgia, as King got older he honed his skills further reading and developing his own voice on the drums. Some of Kings greatest musical influences have been his father Charles King Sr., Ramone “Drum Ducer” Gaskin, and George “Spanky” Mccurdy, Thomas Lang, and many others.
His current credits and accomplishments include playing behind, performing, producing, and recording with:
Travis Greene – National Artist
Bobby Jones – National Artist
Tramaine Hawkins – National Artist
Leon Timbo –Independent Artist
Justin Kennedy – Independent Artist
Dae Lee – Independent Artist
Charles King Jr. – Independent Artist
Lucius McDowell – National Artist
Lisa McClendon – Independent Artist
Raymond Hollis – Independent Artist
KJ Scriven-National Artist

…At the present time King is currently travelling the world as the lead drummer for his friend and mentor, National Recording Artist, Travis Greene. (www.travisgreene.net) Along with ministering in front of thousands each week, King also serves as the house drummer for Forest Hill Church in Charlotte NC. (www.foresthillchurch.org )