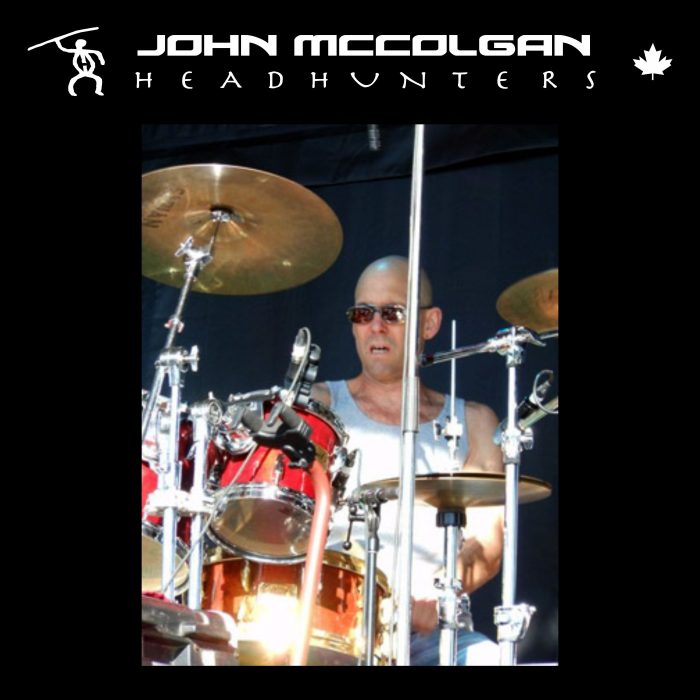 Drummer John McColgan has been playing professionally for over thirty years. In this time he has had the opportunity to play in many different musical styles.
In the late 70’s he began playing in Montreal in local cover bands. In 1980 he joined The Stephen Barry Band, a long-standing local blues band. In 1982 he began playing with Kate and Anna McGarrigle, touring throughout Quebec and across Canada. During the 80’s he played with different bands ranging in styles from funk, to jazz/standards, to blues, to a power trio with another well-known Montreal musician, Jimmy James. In 1987 he and Jimmy joined Michel Pagliaro’s band, touring and recording; including concerts at the historic Spectrum De Montreal as well as the Olympic Stadium. In 1988 he re-joined The Stephen Barry Band, staying with them for ten years, recording four CD’s and performing with blues legends Buddy Guy, Big Mama Thornton, and Vann ‘Piano Man’ Walls. In the late 80’s and through the 90’s he continued to play in many different bands, from the roots rock of Ray Bonneville, to the pop band Gogh Van Go, with studio work taking more and more of his time, including work with the McGarrigle sisters, Emmylou Harris and Richard Thompson. From 1999 to 2002 he was on tour with Quebec singing legend Jean Pierre Ferland, and recorded two albums with him. In 2005 he reunited with the McGarrigle sisters again for more touring and recordings, including a concert at New York’s legendary Carnegie Hall.
He has played and/or recorded with: Emmylou Harris, Linda Ronstadt, Richard Thompson, Teddy Thompson, Kate and Anna McGarrigle, Buddy Guy, Big Mama Thornton, Pine Top Perkins, Kenny Pearson, Loudon Wainwright, Rufus Wainwright, Martha Wainwright, Danny Thompson, Norma Waterson, Michel Pagliaro, Jean Pierre Ferland, Michel Rivard, Jimmy James, Brian Greenway, Susie Arioli, Sue Foley and many others.
His drumming influences are as varied as the styles he is accomplished at, and include Ringo Starr, Jim Keltner, John Bonham, and Steve Gadd, as well as Mitch Mitchell, Billy Cobham, Teey Bozzio, Vinnie Colaiuta, Dennis Chambers and Steve Smith.
He has recently reunited with Jimmy James, and is recording and gigging with the original line-up, including Carl Rufh on bass. He is playing in the Montreal area with the band James Green and the Blues Electric, and is still touring off and on with Michael Jerome Browne.
He has been teaching drums steadily for the last ten years, has recently published his first book, “Groove and Technique”, and has performed educational clinics for Pearl Drums Canada, at schools and music stores throughout Quebec.
John plays and endorses Pearl Drums and Sabian cymbals.

“My approach to drumming and music has evolved slowly over the course of a 30+-year career. I have been very fortunate over this time to have performed and recorded in a wide variety of music situations.
Starting out with the “power trio” style, it has remained for me one of the strongest musical places for me to express myself. From there, it is blues music that I have spent the most years consistently performing, and I have had excellent teachers in this style; specifically, many of the musicians I have played and recorded with over the years. I feel now that I can really express myself and stay true to the musical form in blues to a very high level. I have also gotten into the folk/roots music scene, which has lent itself very well toward blues playing as well as other traditional roots/American music. R&B, soul and funk music have also played huge part in my musical education, and are still some of my favorite styles to play. Finally, as a branch off of the power trio style: fusion, or electric jazz if you prefer, is an approach that I really love listening to and playing. I have had a lack of actual band experience in this style, compared to other music, but it has none-the-less captured my imagination, and led me on the path of extreme technical drumming goals. The music of Frank Zappa particularly, has always been some of my favorite; and in fact one of my earliest dreams was to perform in his band. This has led me to actually learning his music as a drummer, getting down to all the rhythmic intricacies that are involved in playing his music. I also spent two years informally studying jazz music, and this experience opened many doors to musical enlightenment, as well as the ability to improvise within a form. Though I don’t consider myself a jazz musician, I enjoy it immensely and am comfortable playing in this style. Knowledge of musical history, as well, I have learned, is crucial to interpretation of musical forms, and I have also done a lot of listening to the origins of specific styles to attempt to understand them better.
So, as I slowly put all of this together, I learned how to make each style of music live and groove from the drumming perspective; how to listen, react and interpret, while still expressing myself. This has become the single most important element of performing for me and as an obvious extension, my teaching philosophy.
Know and understand the style, play for the music, play for the song and be yourself.”