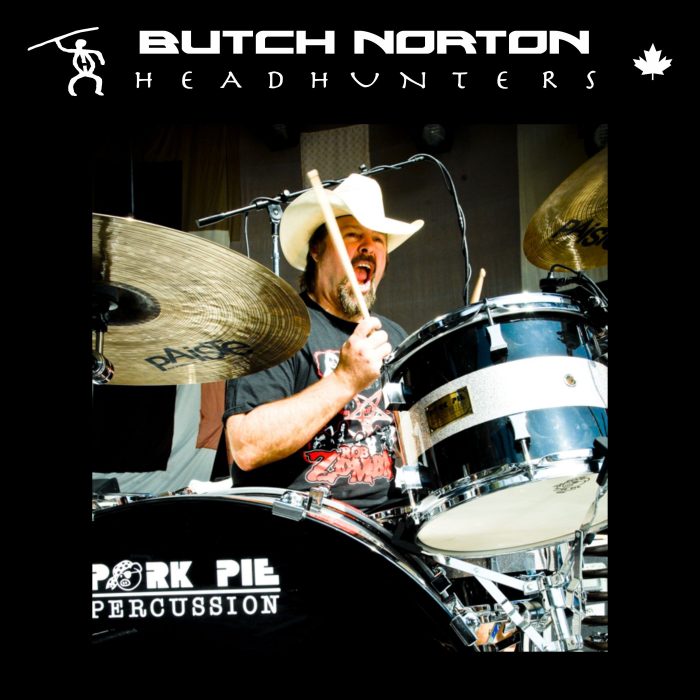 BUTCH NORTON:
drummer, percussionist, producer, creator, performer
Butch was raised in the San Francisco Bay area and has been performing drums/percussion/voice for over 52 years. Butch studied with renowned San Francisco symphony percussionist, Anthony Cirone and Joe Sinai. His drumset studies were under the guidance of Jim Spelman, Scott Morris, and Mike Curotto. He started making a living, playing in the nightclubs of northern California, at the age of 17. In 1980 he relocated to Southern California to study with master percussionist John Bergamo at California Institute of the Arts. His focus was World Music and percussion. Butch composed and performed with Lorretta Livingston and Dancers for the “Music Center on Tour” educational outreach program and started a long affiliation with Bella Lewitsky. He is a founding member of the ethnic, eclectic, experimental percussion duo, Damaru Percussion. He appeared in the Mike Kelly/Steve Prina/Anita Pace production of Beat of the Traps which premiered in Vienna, Austria at the very first “Wiener Fest Wochen Art Festival”. Butch has performed with Native American Shaman and other musicians in the annual spring healing ritual on Mount Tamalpais in San Francisco, with Anna Halprin. Butch recorded and toured with Mercury recording artists Lowen & Navarro from 1989 to 1992. In 1993 he met a man called “E” and toured with him in support of his second solo album called “Broken Toy Shop” on Polygram records. In 1995 E and Butch formed the band called eels and were the first band signed to the new Dreamworks record label in 1996. Their first single “Novocaine for the Soul” garnered them several video nominations for “Video of the Year” and won “Best New Artist” at the European Brit music awards in 1997. The eels songs can be heard in movies such as “Shrek”, “Shrek 2”, “Welcome to the Whoop Whoop”, “Road Trip”, “American Beauty”, “Scream 2”, and “The Grinch Who Stole Christmas”, to name a few.

In 2002, after five albums with the eels, Butch left to tour and record with fellow Dreamworks artist, Rufus Wainwright in support of his album “Poses”. In 2003 and 2004 he toured with Tracy Chapman in support of her album, “Let It Rain”. Butch has worked with producer T-Bone Burnett on projects including “The Big Lebowski”. He has played on tracks for Michael Penn, Tracy Chapman, Rob Dickinson, The McGarrigle Sisters, Fiona Apple, Peter Bradley Adams, Tracy Bonham, and the renowned poet Rich Ferguson, as well as the soundtracks for “Rated X”, “Get Carter”, Rob Zombie’s “The Devil’s Reject’s”, Al Pacino’s “Two For The Money”, “The Bad News Bears”, “The Dukes of Hazzard”, and Warner Bros. epic movie “300”. Butch released his first solo effort on Chisel Sound Records (an independent DJ label/2006) called “BUTCH BEATS: ORIGINAL DRUM BREAKS VOL. I & II”.

2007 saw Butch join the legendary Grammy winning artist, Lucinda Williams, as her permanent drummer.
2016 has already been very busy for Butch. Lucinda’s new album, THE GHOSTS OF HIGHWAY 20, (butch’s 4th album with Lu) was recorded in seven days. no click, all live tracking and no overdubs. The ensemble was Lucinda, Bill Frisell, Greg Leisz, David Sutton, Val McCallum, and Butch. In addition to this new record Lucinda’s backing band, BUICK 6, (butch norton, david sutton, stuart mathis) has released (on lucinda’s HIGHWAY 20 RECORDS) their own instrumental extravaganza called, PLAYS WELL WITH OTHERS, and is on tour backing Lu and opening for her.
Come see Butch play and you’ll get to hear and see all the wonderful tools that Dave and HEADHUNTERS make in action.