Crossovers combine the concept of bundled rods with a regular drum stick and something extra. After lathing the uniquely shaped shaft of the Crossovers, a hole is drilled into the ‘bulb’ area and materials such as poly or bamboo rods are inserted. The stick is finished with our user friendly ‘Grip Control’ featuring our double textured X-pattern.
Crossovers respond and play very fast, much like a normal stick. The bulb area is a solid bead that can be played on the bell of a cymbal or used to execute rim shots and even cross sticking. Because we have combined rods with a solid wooden shaft, the dynamic range of Crossovers is impressive, especially when intensity and volume of the music increases.
Crossovers are available in two diameters: Crossovers, a maple platform, and Crossovers II which are available in hickory and two maple platforms.

Crossovers II – The same design as the regular Crossovers but with the diameter reduced to that of a 5B drum stick. 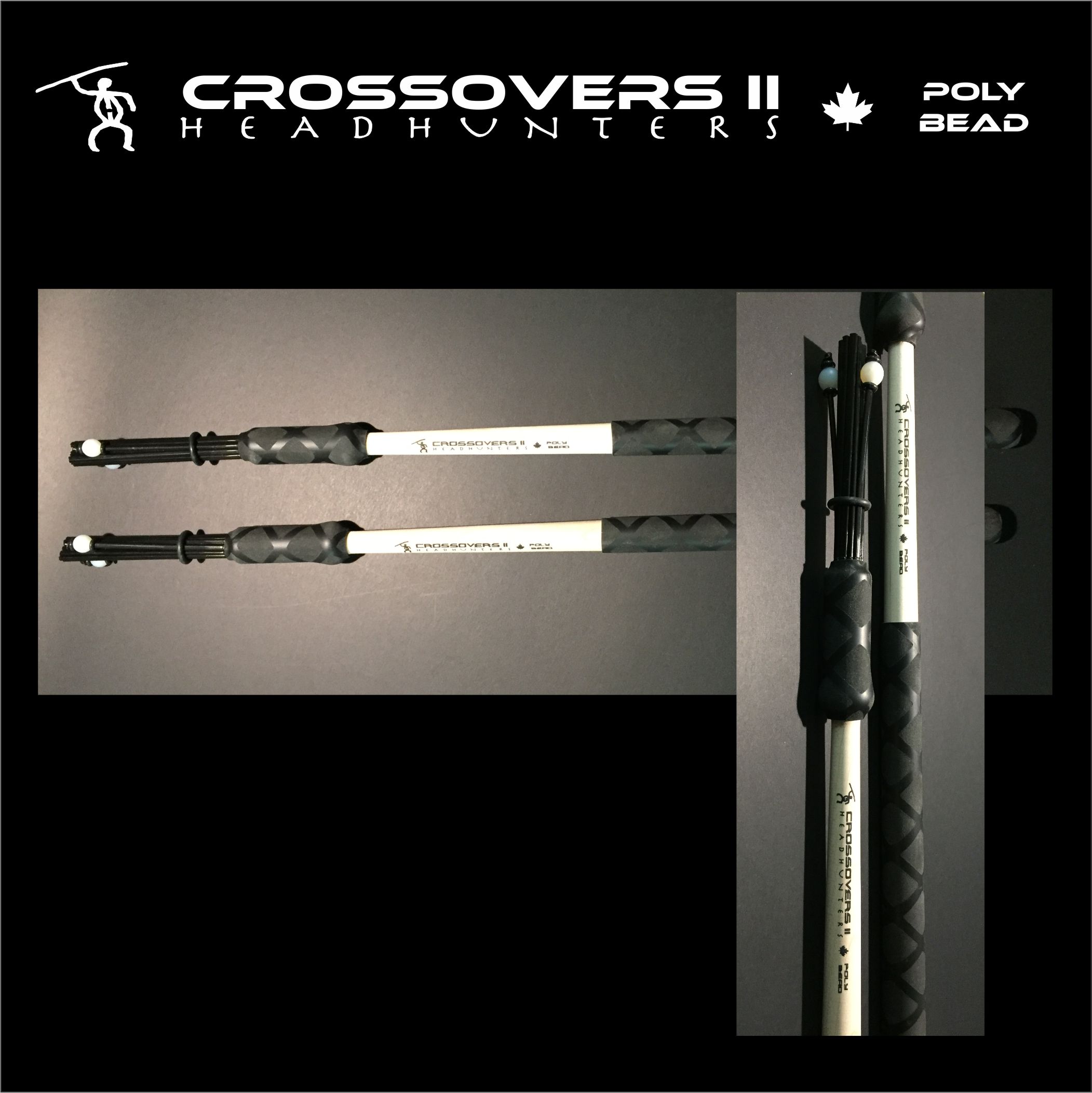 These gems are the Crossovers Poly with an added jingle. Jingles on sticks are not new, but we found that a drum stick’s response is deadened and the jingle sound is often overwhelmed by its host’s natural output. With our Crossovers design, we place the jingle on the solid wood ‘bulb’ where maximum movement will ensure good jingle activation, and the softer sounding poly material allows the jingles to be clearly audible. We add small nylon balls to the poly material, which can be adjusted for optimum drum, cymbal and jingle voicing. The short poly rods enhance the responsiveness and jingle articulation. 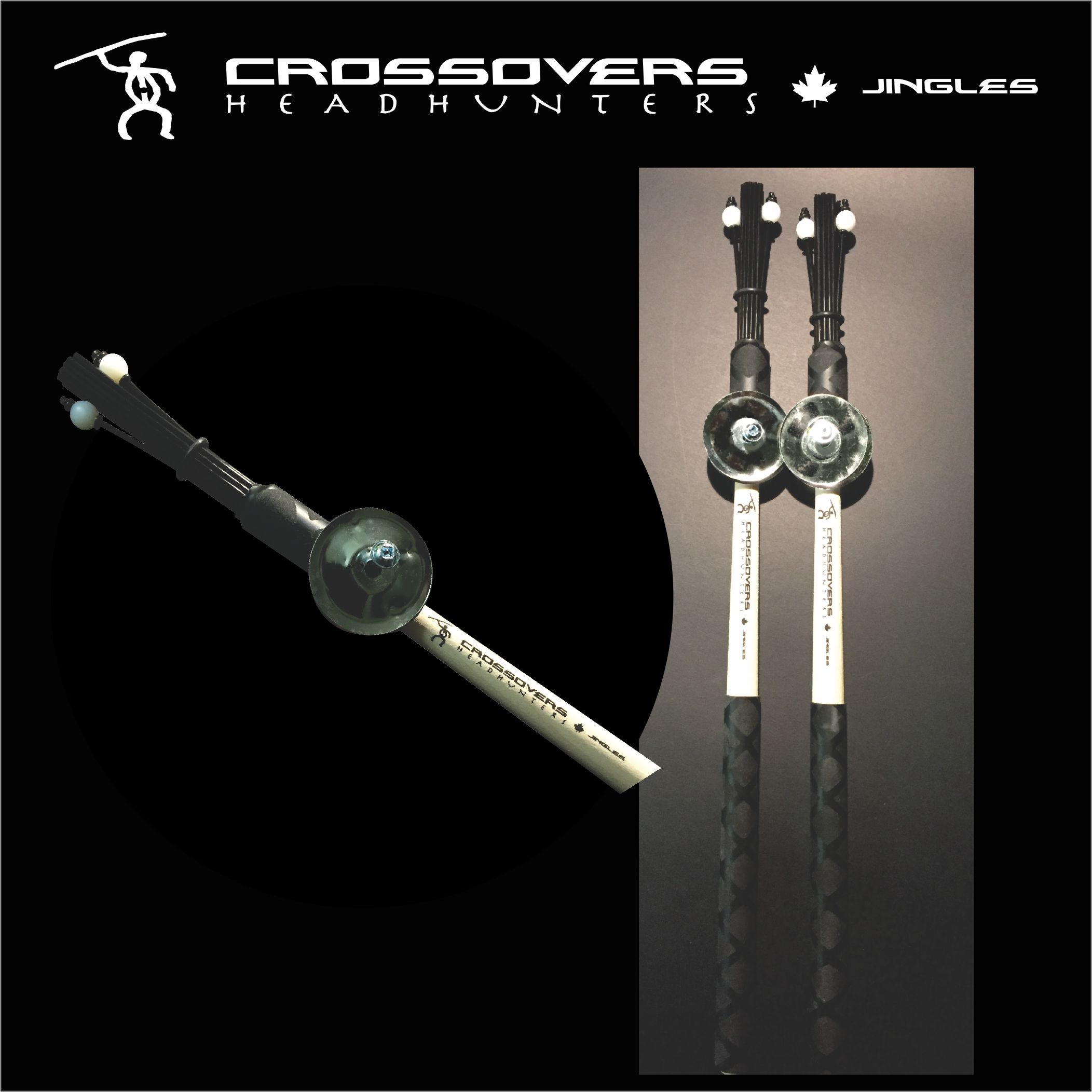 A cluster of polypropylene rods is mounted in a rigid wooden handle. We set three ½ inch solid polyethylene strikers at three different positions around the circumference of the bundle. The O-rings that hold the balls in place allow each ball to be repositioned on its host rod. This ensures that the strikers will always be in position no matter how the stick is held. The strikers can be locked into any position on the poly rods or allowed to ‘roam free’.  Finally … polyrods with articulation! These are a must have for every stick bag.

Cattails Mini are the same as the original Cattails with 3/8″ solid polyethylene balls that produce a more subtle attack than the originals. 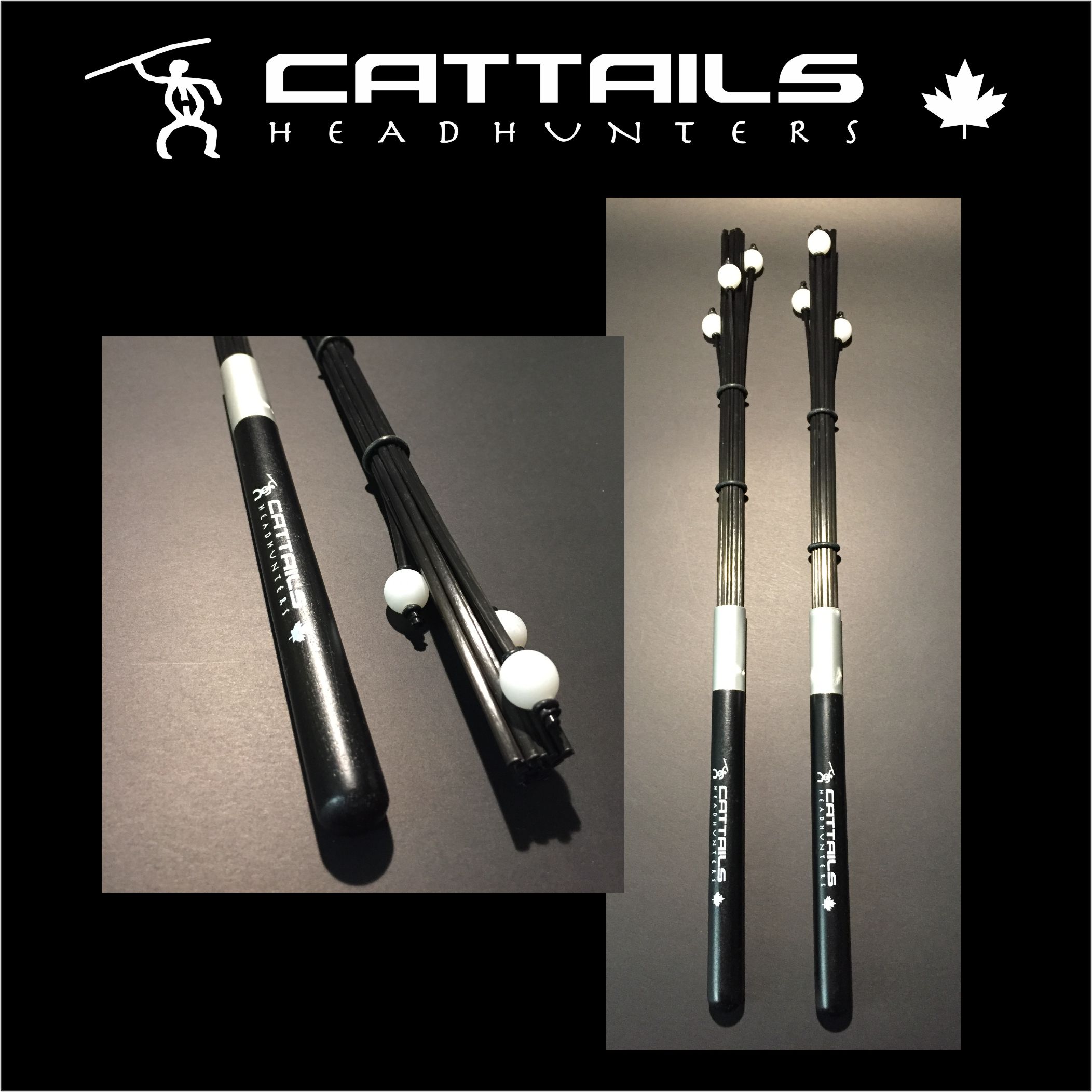 Cube-X sticks are built on a platform of a double-cut central dowel which is then wrapped with 4 flat slats of bamboo. We leave the outer skin on the bamboo to increase its strength. Where other bundled concepts may fail in the hands of heavy hitters, these sticks can take a beating! Although heavier and denser, they are still quiet and make a great specialty stick. 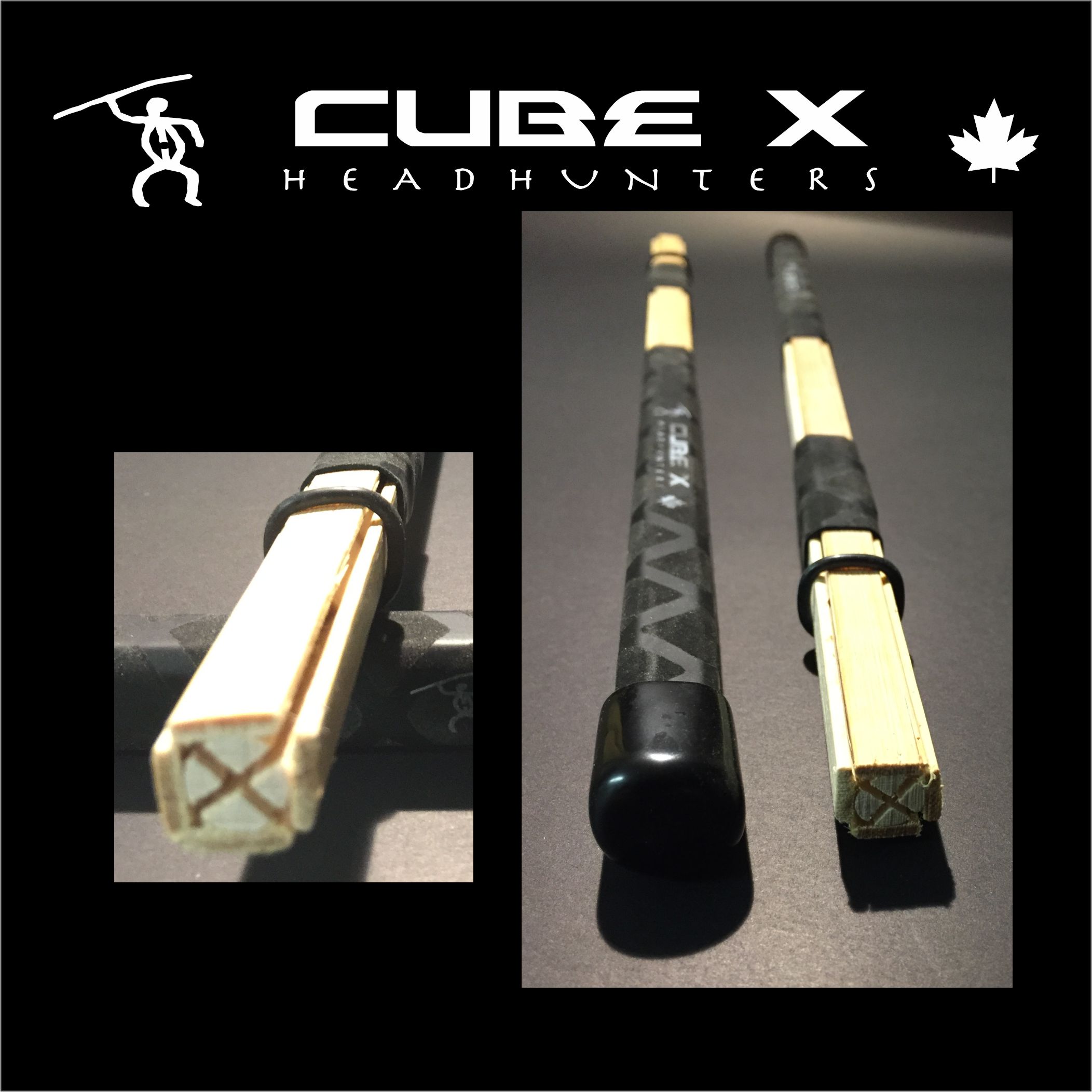 Colliders consist of 4 round bamboo centre rods surrounded by 4 bamboo slats. Three O-rings can be moved forward for a more solid sound or right back to the grip area. This allows the slats and rods to interplay and ‘smash’ into each other. The Collider name aptly describes the sound-scape of these unique specialty sticks. 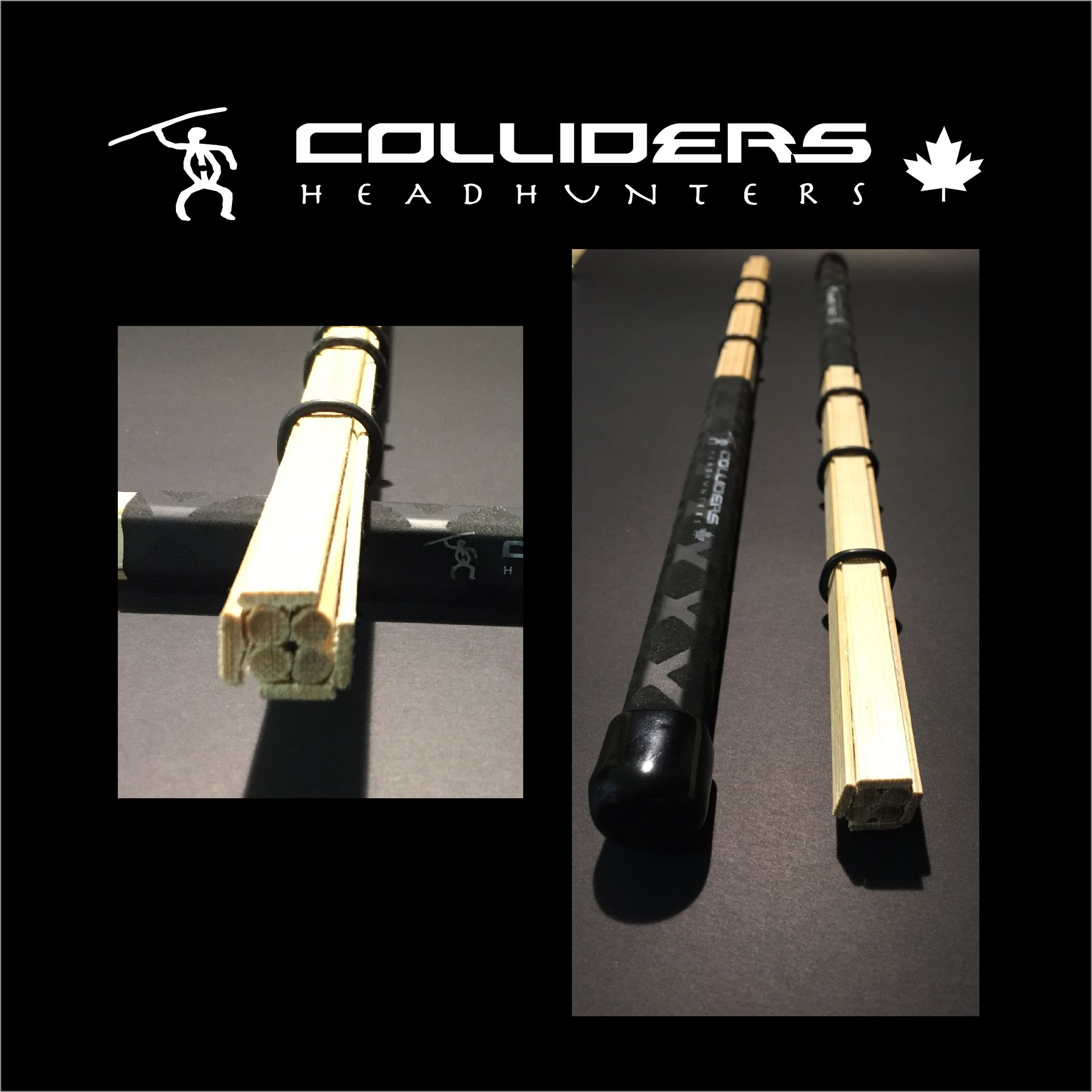 Tough Guys are made from premium bamboo slats. The centre stack of bamboo slats is inset slightly, which gives the outer slats a more lively bounce. Tough Guys are louder than standard bundles and the construction and materials result in a very robust design. 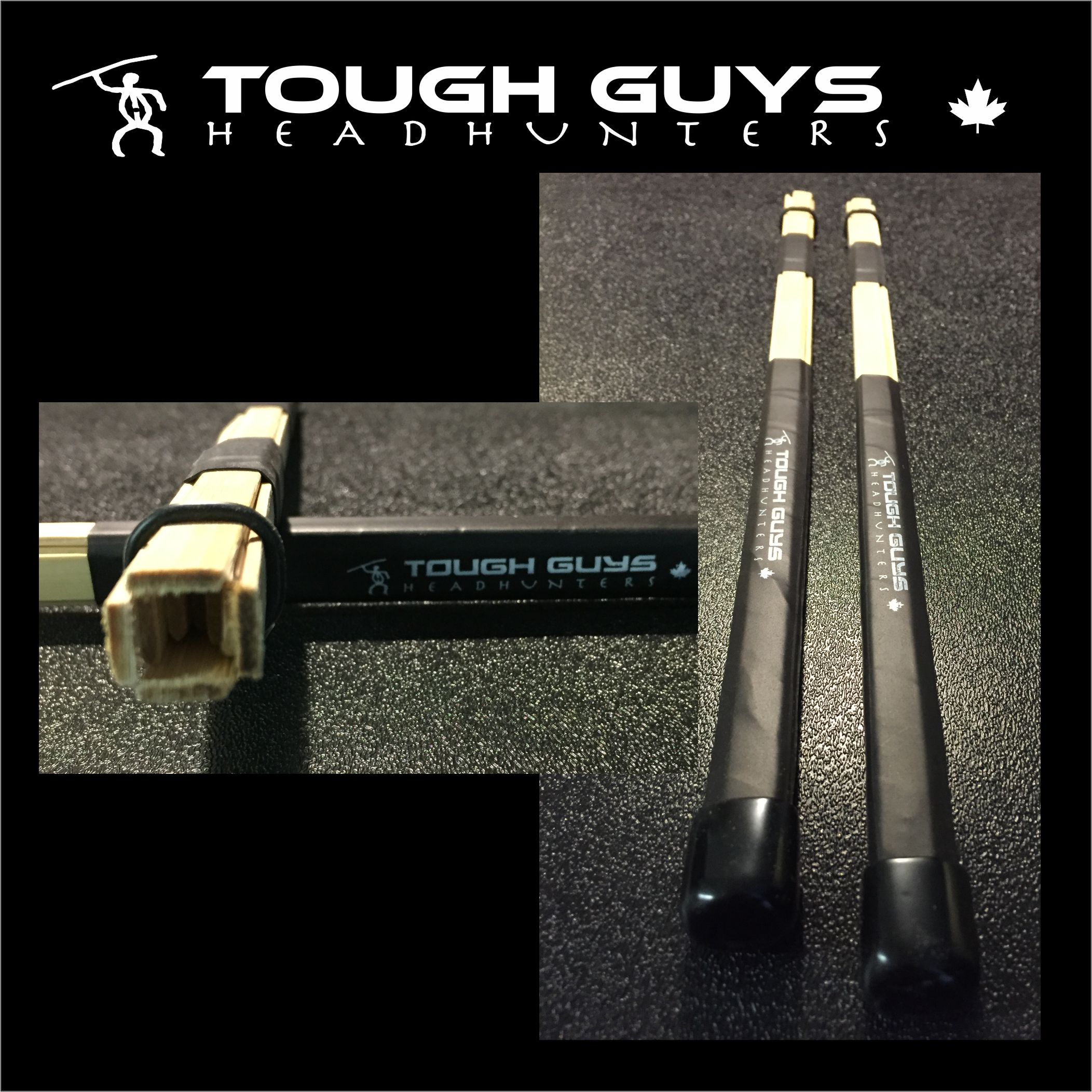 High-Sticking RE4 consist of 4 high-impact white polyethylene slats with a polypropylene rod in each ‘corner’ all surrounding a central birch dowel which has been cut down to the sweet spot. This allows the centre rod to compress and release, providing the RE4 with a subtle bounce when needed. When you look and feel this good, it’s hip to be square! 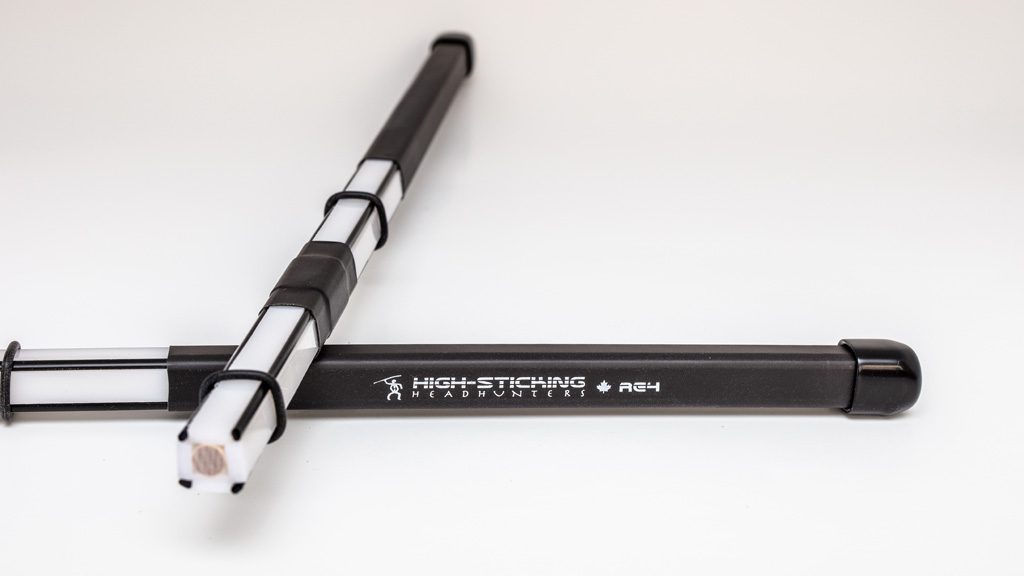 Sputniks are part flat stick, part square stick, part bundled rod, part striker array. Four flat, flexible plastic slats make up the main body of the stick. Each corner is fitted with a 1/8 inch black polypropylene rod, each with an adjustable half-inch nylon bead held in place by movable O-rings. The slats are bendable, so they can be adjusted to produce different sounds and bounce. An O-ring at the base of the slats can be used to pull the slats together and the outer O-ring can be used to pull in the corner rods. Adjusting these O-rings forward will produce a very tight bundled rod sound and loosening them produces a unique attack sound similar to multiple drummers playing slightly out of sync.